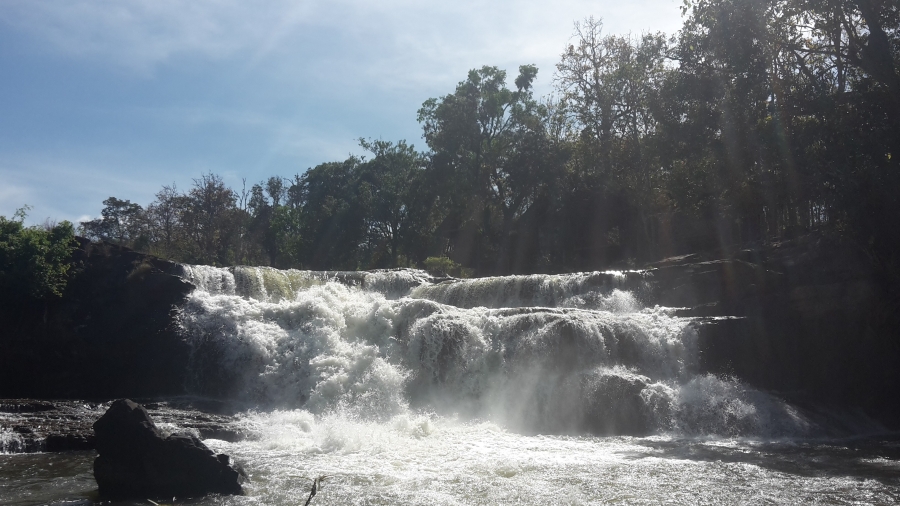 After leaving the caves in Thahek next stop on this journey was Pakxé! The bus ride was 8 hours long and involved a man forgetting his 5 year old daughter at a bus stop (true story) but it all ended up well don’t worry. The ticket can be bought at the local bus terminal and cost 60 000 kipp.

Pakxé is the biggest city in the south province Champasack. Like I’ve mentioned before, most travelers and tourists travel the north of Lao and never make it all the way down. This means yet again that the language barrier is real. Learning some basic words helps a great deal (like vegetarian or toilet). Also for me, being black got me attention. Not in a negative way but people are curious, so a lot of staring and pointing.

There isn’t too much to do in the city itself. The main attraction is a giant golden Buddha on top of a mountain overlooking the town. I decided to walk over there from the city center which took two hours.

I was lucky enough to be there when a music video was being shot with a Lao celebrity performer.

The reason people get to Pakxé is to start off “the loop”. The loop is a route with absolutely beautiful sceneries. There are different ways to go about this. Most commonly people rent a motorbike and do the full one for 3 days. I did the short version which took about 14 hours and focused on beautiful waterfalls. Enjoy!

Just one more thing! For all the coffee lovers out there, there are a lot of coffee bean plantations around Pakxé, defiantly worth a visit! I personally loved drinking it the traditional Lao way with sweet milk.

My time in Lao ended with a 4 day visit to Don Det and the 4000 islands in the absolute south (close to the Cambodian border). The name of this place (4000 islands) describes it pretty well. Mini islands all over the Mekong river and I believe only two of them are livable.

Don Det where I stayed is the most chill place I’ve been to. A man I met described as the heart starts beating slower as soon as you enter the island. I think that sums it up pretty well. People hang out, eat, party, sleep a little bit then repeat. I ended up meeting a really cool girl from Australia named Amalini. We met when I stopped her on the street asking if she knew any hostels because it looked like there where only bungalows everywhere. Turns out she was looking for one too. In Don Det it’s actually cheaper to share a room than a dorm so we found a place about 10 minutes after we met and decided to share a bungalow. This laidback, shopping fanatic chick from Melbourne, is a doctor and has traveled a whole lot! We ended up going to a bar (Nang Ning) that had mattresses all over and just ate and relaxed for hours.

We later got invited to a jungle party that apparently everyone on the island was going to (the island is not a big place). We managed to find our way over there and met other travelers from all over the world. I even ran into the guy I went to climbing school with in Vang Vieng a couple of weeks earlier. After I felt all partied out it was time for me to head back. I didn’t walk very far when a dog started barking at me aggressively. Usually street dogs are super nice I’ve noticed in Asia but this was clearly one marking it’s territory. There was no way I would pass this dog scared as I was (Amalini wanted to stay at the party so I was walking alone). I walked back to see if there was another path. While doing that I walked passed a guy that also seemed to be leaving the party. I asked him if he was walking t the main part of the island and if I could join since I was scared of the dogs. He didn’t mind and was used to dogs, not scared at all. I noticed that because along the way we passed many dogs who where barking and coming towards me specifically. He’d block them from coming close to me and make them go away. We were talking and he told me he also was Melbourne (like Amelini) with a grandfather from Maroochydore (a small place I lived and worked at for almost 4 months). We got to his hotel before my bungalow but he was sweet enough to walk me all the way to my door. Thank you Aubrey! Really appreciate it 🙂

Like I said I didn’t to much but chill on Don Det. The most exciting thing that happened was when I went to get a bodyscrub and turns out it was a ladyboy place and let me tell you, it was the best massage I’ve ever had! First time I got my back cracked! Also, the stars at night are amazing! Besides that just chiiiill!