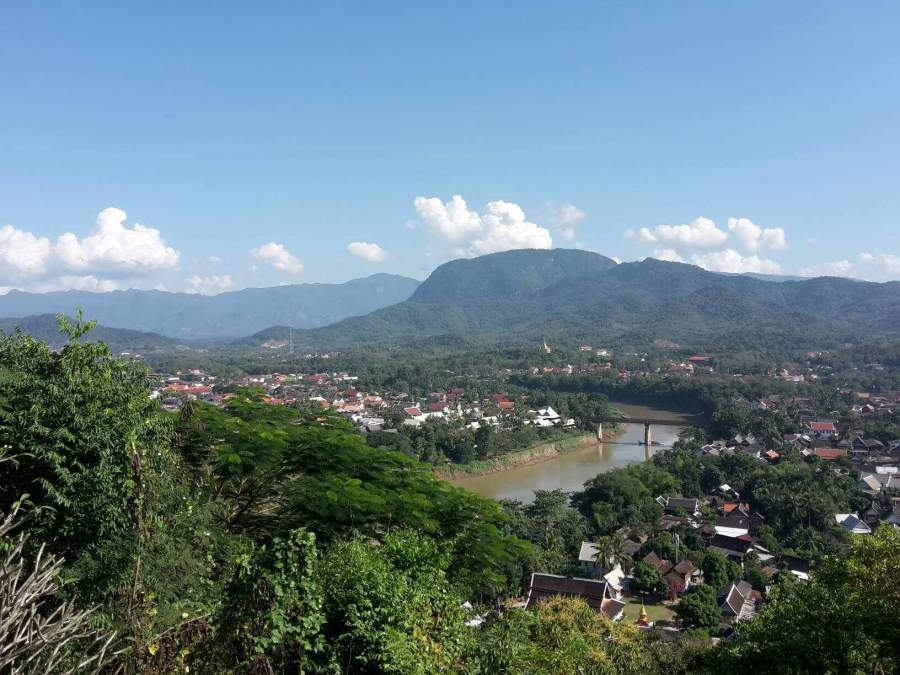 My time in Thailand came to its end and now it was time to enter Lao. There are three was to cross the border. The most common way is to go by slow boat. When I first heard about the slow boat I thought it  was some kind of cruise since the trip to Luang prabang takes two days. It’s really not at all, It’s a wooden traditional Laos boat that moves in a very slow speed due to shallow water and  big rocks down the Mekong river. This way of transportation costs about 1700 baht. If two days is to long but you still want to get to Lao by boat there is also a speed boat which costs more and is more dangerous.

For me the thought of speending two days on a boat was not very appeling although im sure the nature sceneries are probably very astonishing. I chose to take the bus which took 18 hours from Chaing Rei and the ticket was for 950 baht. You can only purchase the ticket at bus station 2, the same day as departure so before 12.30 when the bus starts moving. To make sure I’d get a ticket I was there around ninish and then went for breakfast at a nice little cafe next door.

Once I got inside the bus i was so pleasantly suprised when I realized there where no seats! Thats right, every passenger got there own bed and window. This made the journey so comfortable!

After about a 3 hour ride we got to the Thai border to exist, it all went really smoothly and the about an hour later we entered Lao. At migration in Lao you need a small picture of yourself and for the 30 day visa you pay a fee. The amount  of the fee depens on what country you’re from but it ranges from 30 to 40 american dollars. After this part is over we could all finally just relax and enjoy the ride.

It was so weird as soon as we got in to Lao you could see the difference from Thailand. The landscape is amazing with its high and very green moutains. The majority of time we were up there going quite fast on small narrow very winding roads. We passed by numerous of small villiages with wooden houses. It was a bit difficult to relax at first due to the speed and me being scared of an colition taking place since there was oposite traffic that was supposed to fit on this tiny road as well. Eventually I got used to it though.

The best part was looking outside the window  (laying down) up on the moutain looking at the uncoutable number of stars before falling asleep. It was magic 🙂

Accoring to the time table we were suppose to arrive in Luang Prabang at 7 am so confusion occured when the bus driver said we had arrived at 4 am (!). Completly dark and newly awake I got off the bus and stood on the street with two other women from the bus. We didnt know where to go since everything was closed and none of us had internet. Even if we had booked something it was most likely closed at that time. I had actually made a booking before hand knowing I would be quite tired when arriving,  I knew the name of the hostel and luckily there were signs leading to it at least so I thought. Unfortunately there are two places called “Y not Lao” , we  found this out after waking up the manager close to five in the morning. He was friendly though gave me a map and showed me where to go. After a 20 minute walk we found it! And it was open! By the  time we got there the sun was out so I could finally see the city 🙂

I started of my time in Luang prabang by going up mount Phousi. At the top there is a temple and you see a beautiful view of the city.

The only part I didn’t like with my experience with mount phousi was people selling small birds in a cage they barely could fit in. They were sold to be realised. The sales people try to guilt trip you into paying to release the poor birds, how about you just set them free!!

The second day I decided to take the bus to Kung si waterfall. It took about 40 minutes to get there and all I can say is wow!

After passing all the waterfall parts I noticed there where stairs up somewhere. Curiously I started walking up and after a lot of steps there where arrows that said infinity pool. Cool I walked through the jungle for about an hour before I finally got to the infinity pool.

I couldn’t stay long there because the bus was leaving shortly. I realized I had to run if I wanted to make it so off with my flip flops and I ran feeling like Usain Bolt. I was late but the bus was waiting thank God! otherwise it would have been a 5 hour walk back or a really expensive tuktuk.

Talk about a great start in Lao!